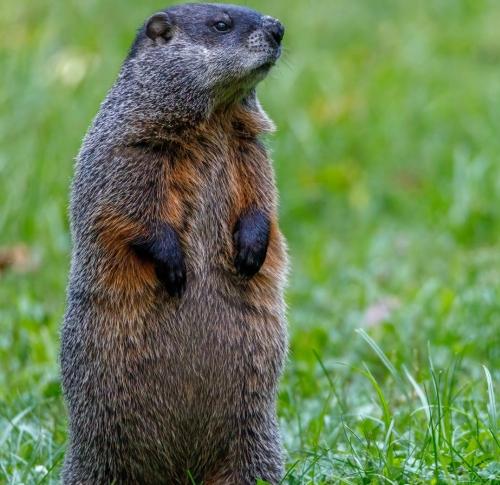 February is still the middle of winter, but there is hope that before long spring will arrive. On the 2nd of the month a pagan goddess holiday called Imbolc used to be celebrated in England, a Gaelic traditional festival marking the beginning of spring during which people lighted candles to banish dark ghosts. Later, this celebration became a traditional Christian festival named Candlemas, commemorating the ritual purification of Mary and the ritual presentation of the baby Jesus to God in the Temple at Jerusalem.

Valentine’s Day, on the 14th, is a day for romance and maybe even hope for a spring wedding. Generally, snowdrops start to appear in the countryside, heralding brighter days.

However, North America boasts perhaps one of the most bizarre events in this period. In a tradition brought in by German immigrants, crowds gather in many places to see if a certain animal can give them an idea of when spring might arrive. This happens every year on the 2nd February, known as Groundhog Day. The animal in question is in fact the groundhog, native to North America.

At the beginning of winter, the groundhog digs a burrow and hibernates. Like all hibernating creatures, it wakes up when it feels that winter is over. Ever since 1886, in the small town of Punxsutawney, Pennsylvania, a groundhog, always given the name of Phil, is unceremoniously woken up by a group of men in 19th-century clothes and top hats, and held up to the crowd.

The idea is that if Phil sees a shadow, because the sun is shining, he will retreat into his burrow and winter will continue for six more weeks. On the other hand, if it is cloudy, he will wake up properly and spring will arrive early. Unfortunately, Phil’s predictions are, as you can imagine, rather unreliable. Observers have noted that most groundhogs emerge from their burrows in the middle of March, whatever the weather. Nevertheless, it is a good excuse for a party. Moreover, it is of course important to keep folk traditions alive.